Smaragd. As words go, it doesn’t exactly entrance. It just sits there, senselessly, looking like a spelling mistake. Even as words in foreign languages go it is unusually unappealing. The most popular wines are pretty much united by their possession of names that sound pretty good even when coming out of an English mouth: Chablis; Pomerol; Vega Sicilia; Chianti Classico. Here is one that sounds like the Swedish Chef sneezing, and it is one that the nation of Austria has chosen for some of their finest wines.

This Smaragd is sitting upon a bottle of Domäne Wachau Gruner Veltliner, the basic version of which is one of Waitrose’s summer bankers, a fresh, crisp, saline face-slap of a wine. This one, though, is more than twice the price, a fact I must admit I had pretty much forgotten when I decided to open it. I was expecting something along the lines of the basic model, but discovered a very different beast, a honeyed golden colour and with a host of new flavours: lime, dill, lychee, green apples, and a kind of deep, slightly glutinous, lingering savouriness that I’m afraid reminds me a bit of bogey. In a good way.

So what is Smaragd? It’s the ultra-strict top classification for white wines in the Wachau. Domäne Wachau use it for a handful of single-vineyard sites (of which Achleiten is one), where they pick their grapes only in late October or early November for “ultimate ripeness and flavour concentration”. The wines are built to last for a decade. It’s also a small green lizard, one of which is pictured above. This is impressive stuff, complex and contemplative and an incredible contrast with their basic wine, worth a splurge simply as a learning experience. Rubbish, rubbish word though.

The week in wine

This blog started as a place for me to keep notes of what I was drinking, and what I thought of it. It’s largely lost that purpose since, and is none the worse for it in my opinion. But it’s still my blog, and I think there’s a place for some brief record of my humdrum at-home drinking. So here, then, are my wines of the week:

* Domaine des Escaravailles La Ponce Cotes du Rhone blanc 2009 – this week’s sunshine demanded fridge-fresh white wine, but nights are still a little chillsome. So summer’s ultra-dry quenchers must wait; for now I want a white with a little weight. This delivered that, lashings of creaminess and a slight green apple spritz, getting the texture so right that a slight lack of genuine flavour was easily forgiven. From Theatre of Wine, the extremely exciting new(ish) wine shop near Tufnell Park.

* Tahbilk Marsanne 2007: The Escaravailles was such a success that the following night we went for a relative, in the shape of Tahbilk’s ever-reliable Marsanne (one of the grapes used in La Ponce), a fair bit lighter and crisper than the CdR. One to look out for when Waitrose are next knocking 25% off.

* Maury Solera 1928, Case number 849: A rare sticky, dewaxed and uncorked on Saturday night. Remarkable stuff, this. Nutty and complex, a wine to savour and, if you’re so inclined, to ponder. Delicious. £15 for 50ml (from The Wine Society), so not exactly cheap, but there’ll definitely be another bottle in my next case.

My only other vinous activity was an outing to said Wine Society on Tuesday, of which more shortly.

OK, Lady A, consider yourself dumped. I spent a couple of days pondering it, the main question being: sure, it was good, but did I like it? Really, I knew the answer the first moment I tasted it. I’m glad I did (taste it, I mean), but really, I wouldn’t want to again.

The final nail in Lady A’s coffin came last night, when I uncorked this, a wine that strives not simply for complexity, as if for its own sake, but for beauty. Without wishing to give myself away as some kind of vinous jonny-come-lately, I’ve not had a huge number of chenin blancs in my time. Indeed until this summer I had no idea of the heights that it can reach at such decent prices. But first the FMC, and now this … it’s a game-changer, really. The FMC cost £13.49 in the Waitrose sale, this £13.86, 37 pence between them. These are two prize fighters competing in the same division, punch for delicious, delicate punch: new world (that) v old (this); 15-year-old vines (this) v 35-year-old (that); honey and dried apricot (that) v searingly, tingly bright acidity (this, with 6.10g/l residual sugar v the FMC’s 12.8). Don’t ask me to judge between them, it’s like comparing The Hitchhiker’s Guide to the Galaxy with The Godfather Part II. They’re just amazing, both of them. But this one’s biodynamic, as well – she’s got the ethics as well as the looks. She’s a stunnah, true enough. 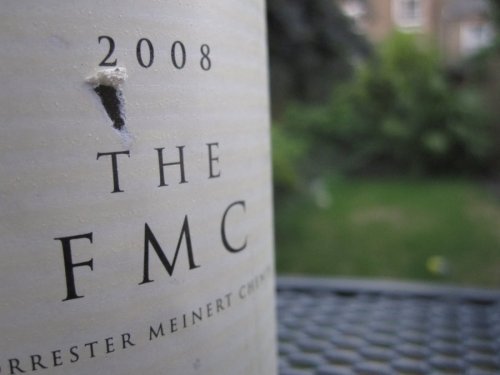 I’ve had a bad wine year, I think. If I try to think of my wine of the year so far, and we’re near as dammit halfway through it so I should have had some good ones by now, there’s just nothing that stands out. Lots of decent stuff, sure. Plenty of mild, gentle pleasure. But no stars.

This is stellar stuff. It’s not just liquid inside this bottle, it’s hope, it’s fun, it’s life. It’s the reason I don’t just buy wine and drink it, but read about it, obsess about it, invest my money and my mind in it. It’s the reason why I shouldn’t just keep buying that £6 wine that I really like but keep looking, keep pushing my boundaries and my budget.

It’s a loveable wine. Voluptuous. We first tried it last year, at a charity dinner at a South African restaurant in town called High Timber. It was good. So I bought a bottle in the Waitrose 25% off everything sale (where it’s £17.09 currently, with no discount), and since then it’s been sat in my wine rack, waiting for a special occasion. Today – eating a salad in the garden with my wife and some sunshine – was special enough.

It tastes of so much. It sits in your mouth, brassy and bold, caressing it from the inside, daring you to swallow. It’s honeydew and nectarine and all things nice. I couldn’t afford to only drink £17 wines, but £17 isn’t really so much money for something that’s so much better than everything that costs less, really. Delicious. Brilliant.

I may have been a little over-effusive in this post. Sorry.

So this, to the best of my knowledge, is the first Gruner Veltliner I’ve ever drunk. I’ve tended to avoid Austrian wines, because they’re never very cheap and they’re often very floral, but I was wrong wrong wrong. Because this really is delicious, in a very light but utterly delightful way. It’s got a little whiff of petrol to it. It’s got a citrus zing, quite full bodied, just 12% alcohol. Very easy to drink, but not just an easy drinker. As Victoria Moore said of this wine in The Guardian, “it has everything you hope for from a grüner veltliner – clean citrus, tremendous nerve, poise, confidence and enough ­acidity to make it appear bone-dry although it isn’t quite.” “Spicy, peppery and crisp,” said Tim Atkin. “Floral, lemon-zest and white- pepper-spiked,” said Jane MacQuitty.

Quite a lot of people seem to like it, and I’m one of them. A couple of pounds off at Waitrose at the minute, £5.99 and an absolute steal, I’d say.

I’ve been living on scraps lately. I have a natural hoarding instinct. When I’m handed a plate of food, I’ll always leave the bits I don’t like, eat the bits I least like first and leave my favourite stuff until last. So it is with wine. I order a case of wine, the bulk of which usually costs a fiver or thereabouts, with a couple of bottles that might cost three times that. But then I drink the cheap stuff and then, finding my wine rack a little bare, order another case of extremely similar composition. So what I end up with is a lot of nice bottles of wine that I don’t really drink.

Today, though, I’ve opened a good ‘un. It’s been a long day, involving work, childcare and, I’ll admit, a little watching of tennis. The kids didn’t nap simultaneously – indeed one of them didn’t nap at all – so there was no pleasant middle-of-the-day downtime. Rachel and I are tired and a little bit ratty, and just had something of a minor falling out after I vetoed America’s Next Top Model, probably her favourite TV programme and almost certainly my least favourite. I know marriage is all about little compromises, but you’ve got to draw the line somewhere.

So when I raided the wine cabinet, I was minded to give myself a treat. And I did. This costs a few pence short of £20 at Waitrose, or £15 in one of their occasional and delightful 25% off everything online sales, and is thus one of the most highly-valued wines in my little collection. At last week’s gigantic and excellent Bibendum tasting, which I haven’t written up yet but will soon promise, I conducted by and for myself an impromptu tasting of pinots, taking in Australia, New Zealand, America and Burgundy (and won, quite against my own expectations, by a Californian, the Marmesa Santa Lucia Highlands PN 2007). None of the Kiwi pinots I tasted there was a match for this one. Some can be a little watery, a bit too light-bodied, and while they could still go down very nicely on a summer’s day and after a couple of hours in the fridge, they’re not a match for me, in a mild funk, on a chilly January evening. This, though, looks serious. It is deep, dark, inky, not at all translucent away from the outermost edge. It smells of earth and capsicum compote. It tastes of plums and damsons and cherries and red cabbage. It is a little wild, a little angry. It is the right wine for me right now.