Sassicaia, Guidalberto and the sense in “trading up” 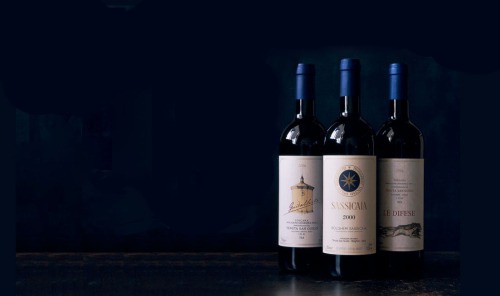 I went to an excellent tasting last week, organised by Decanter magazine, which claimed to have brought together some of Italy’s greatest winemakers (as an aside, it’s just as well they can organise a decent tasting as their magazine – at least to judge by their most recent issue, an enormous brick filled with useless information about the awards they recently gave away and endless puffing of the credentials of the judges who awarded them – isn’t up to much).

Sadly I didn’t have enough time to work my way around a room crammed both with interesting wines and with people wanting to try them, but there was no way I was leaving without trying, for the first time, one of Italy’s true icons, Sassicaia. I’d been waiting for this moment for four years, since a lovely afternoon spent in Bolgheri, the small town in Tuscany where it is produced (I’m always more attracted to wines when I feel that I know a bit about where they are from). While in Bolgheri, little more than a stop-off on the way to Pisa airport at the end of an extended stay in the Maremma, I’d had a wonderful meal, visited a brilliant enoteca and absorbed enough of the Sassicaia legend to become mildly obsessive about it – only the £125-a-bottle price tag was holding me back (and that’s the cheapest bottle I can find – if you want to buy a bottle of the 1985 from Harrods you’re looking at £2,400).

Back to London, and having been bustled away from the Gaja table I found Tenuta San Guido’s surprisingly open and made my move. There were three bottles available: the latest vintage (2009) of La Difese and Guidalberto, their two more reasonable offerings, and the 2004 Sassicaia. It’s perfectly possible at these tastings to thrust your glass at whoever’s manning the table, demand a sample of the top wine and be on your way, but I consider that a bit rude and always make a point of tasting through a producer’s entire range. Not much of a hardship when it’s as small and as fine as this one.

I ended with the Sassicaia, and was not disappointed. It was very intense, laden with spices before gradually revealing layers of brambly fruit. But the thing is, the Guidalberto had also been excellent – loads of mouthwatering acidity, good tannic structure, bright fruit. They’re not identical by any means – Sassicaia is made of cabernets sauvignon and franc, while Guidalberto is a blend of cabernet sauvignon (some of it the leftovers from the Sassicaia vineyard), merlot and sangiovese; Sassicaia has an extra year in oak barriques, none of which is American – but both were wines that I’d be very happy to pop in my theoretical cellar. The biggest difference between them, so far as I could tell, had nothing to do with quality but reputation and cost: their recommended retail prices are £103 a bottle apart. And while the Guidalberto would make you happy now and for the best part of the next decade, a Sassicaia won’t really be at its best for a good decade after it’s produced – so you might as well factor in another £10 a bottle in storage charges while you’re at it.

Frankly, I struggle to make sense of it. Now I’m not a big believer in giving wines scores out of 100, and have no idea how well the palate of Antonio Galloni – Robert Parker’s Italian expert and heir apparent – aligns with my own, but I find his reviews of the two wines telling. First, the Guidalberto:

“The 2009 Guidalberto flows across the palate with layers of radiant red fruit. This is another striking, supple Guidalberto loaded with personality. Stylistically it is quite close to the 2007, but with perhaps a touch less body but equally silky, polished tannins. Freshly cut roses, spices and a burst of pure red berries add nuance on the finish. Guidalberto is no longer the stunning value it once was, but it is quite gorgeous in this vintage just the same. This is easily one of the best vintages I can recall tasting. Guidalberto is 60% Cabernet Sauvignon and 40% Merlot. Anticipated maturity: 2012-2019. 92+ points.”

So he likes it then. And the Sassicaia:

“The 2004 Sassicaia is a lovely, understated effort. Medium in body, it presents nuanced layers of sweet dark fruit, licorice, menthol and toasted oak that gradually open onto a finely-knit frame of notable length. Today it appears to be quite reticent and still holding back much of its potential. Both bottles I sampled showed less vibrancy and freshness in both color and flavors than the other top 2004s I tasted alongside it, suggesting that the wine is still suffering from bottle shock. Anticipated maturity: 2010-2022. 93 points.”

The Difese, by the way, was also very enjoyable, in a distinctly fresher, more gentle style. But the qualitative leap from that to the Guidalberto (which costs an extra tenner) was more obvious than that between the Guidalberto to the Sassicaia. Sassicaia doesn’t even have rarity on its side – there are 10,000 more bottles of it made than of it’s little brother. So where’s the value here?

3 responses to “Sassicaia, Guidalberto and the sense in “trading up””