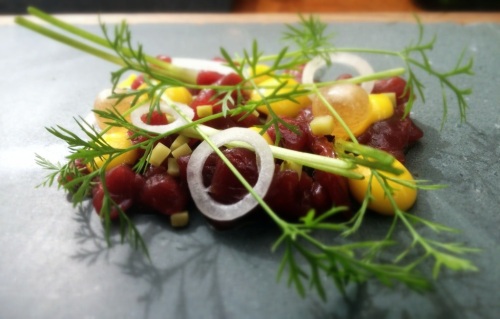 There’s lots of wonderful wine that I can buy, either as a regular indulgence or an occasional treat, but the very best, the most renowned, the greatest names, is now and will always be beyond me. There is a lot of wine, entire categories of wine, that is the reserve of the extremely, supremely, astonishingly or obnoxiously wealthy. Food, though, is far more democratic. The cheapest bottle of supermarket wine costs about £4, a bottle of 2009 Chateau Petrus 875 times as much, about £3,500. The cheapest supermarket sandwich costs about £1; a Big Mac meal costs £4.29; lunch at Britain’s second-best restaurant costs £35.

I’ve never been to the Fat Duck, widely considered Britain’s No1. It’s wildly expensive – £195 a head, to be precise, with no choices and no quibbling, so still quite cheap in wine terms – and booked up months in advance. But I go to l’Enclume quite often, most recently last weekend. L’Enclume’s great problem, hidden as it is on the edges of the Lake District, is that it’s nowhere near London, denying it the custom of quite a decent percentage of the nation’s wealthy gourmands. The advantage of this is that if you happen to be nearby, it’s pretty easy to get a table: mine, for lunch on a Saturday in the middle of the Easter holidays, was secured with a little over 12 hours’ notice.

It is incredibly good. Service is very friendly, even if there is a little too much of it and they are rather too fond of adjectives – tell me what’s on my plate by all means, but let me judge if the salt-baked beetroot is wonderful, or the caper jam is amazing. But the food is, at its worst, excellent, and very frequently several notches better than that.

And the price! For thirty five English pounds I received a glass of English fizz, six plates of culinary virtuosity, a selection of freshly-baked and very tasty bread rolls (which, when we’d finished them all, they offered to refresh) a coffee and a clever little petit four (I thought the coffee was going to cost extra, but it wasn’t on the bill and wasn’t added when I offered to pay). There was also a 17-course tasting menu for £96, which is the only option at dinner, plus an optional additional course of British and Irish cheeses.

If I’m forced to have a quibble, it’s that of our six courses one had been there when I last came, perhaps six months ago, and another had been only slightly tweaked. But it would be churlish to complain, not when a couple of the dishes, including the raw venison, mustard, coal oil and fennel above, which contained two pearlescent fennel bonbons that all but prompted a standing ovation, and a rhubarb, apple, yoghurt and sorrel pudding, were genuine triumphs. I love their use of herbs to lift dishes, and their total avoidance of overly-sweet desserts. And if you go, don’t miss the village cheese shop (try to get some of the best local cheese – and when I say local I mean about a mile away – St James) and the priory. 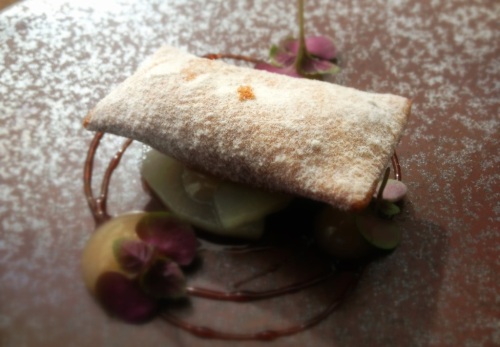 I also went to the sister restaurant, Rogan & Co, a couple of minutes’ walk away. It’s good, though markedly less so than its big brother, and also less reliant on local ingredients. But while I wasn’t drinking at L’Enclume, what with having to drive to London a few hours later, at Rogan I enjoyed a bottle of one of my favourite wine-list wines, Pieropan’s Soave. Bright and light and beguiling, it’s one of those whites that is delicious with pretty much anything a dry white wine can be delicious with, including nothing at all. It cost £26 at the restaurant, about £13 from a shop (Laithwaites has it; at winedirect.co.uk it’s a bit cheaper, but it’s widely available from independents both here and in America). There’s only one other wine I’ve so far discovered that is equally good value, equally common in restaurants and equally good at it’s job – and as I’ve just bought a bottle, perhaps I’ll write about it soon.

I’m currently on my annual holiday in France, but I’m having a grim old vinous time of it. This year we’ve found a villa in the Hautes-Pyranees, an area known less for its wine than for growing a lot of corn and then stuffing it down the necks of geese. Interesting wine shops do exist, but today (day seven) was the first time I saw one that was open, and a hungry child stopped me going into it (my own hungry child, I should add – France isn’t yet overrun with famished shop-obstructing street urchins).

This was in a town called Vic en Bigorre, where a market-stall-manning local I asked for a restaurant tip pointed me in the direction of a place called Le Familia, just next to the main covered market. The menu was exceedingly promising, reading, in its entirety: potage, entrée, viande, legumes, desert – €12, vin et café compris. For the non-French-speakers among you, that’s: soup, starter, meat, vegetables, pudding, with wine and coffee thrown in, for €12. The choice, such as it was, was thus: red wine, or rose? They didn’t even have white, that’s how little choice they offered – though they did agree to knock something special up foodwise for the kids (namely a thick slice of ham and loads of extra salty chips). One of the people I was with was vegetarian; she was given an avocado to start (and a lettuce leaf, to be fair. Plus they had graciously sliced the avocado in half and removed the stone), and for her main course got exactly the same vegetables as everyone else (chips and brocolli), only without the viande.

I basked in the authenticity of it all, as the room filled up with pensioners sitting alone and the occasional relaxed couple, while the families who had the foresight to book basked in the small pavement terrace. Everyone was welcomed by name, clearly enticed to return by the crazy prices (not the food, so much, though it was fine). The toilets were dirty, the service brusque. I loved it. Go.

(But don’t ask for ice cream for desert, because you get the grottiest Wall’s gunk imaginable, and they make pretty good rice pudding and crème caramel themselves)

In Britain, of course, where duty on a bottle of wine, plus VAT on that duty, is £2.17 (with VAT still to pay on the cost of the actual wine), and where restaurants think nothing of charging three times retail prices (or more) for wine, it is pretty much impossible to get a single bottle of plonk, however hideous, for the price that Le Familia charge for a well-lubricated four-course meal. Infuriating, and I might be more inclined to protest about it as well if I weren’t still so ruddy full.

This is probably the best-timed holiday I’ve ever had, coming as it does at the end of a period of loopy work pressure (serves me right for taking a big freelance commission I probably should have avoided) that coincided with a fairly stressful house-buying process – we exchanged the day before we flew to France. Sadly, the moment it ends I’ll be cast headlong back into an even more intense period of already-accepted freelance work coupled with preparations for actually moving, which happens a fortnight after our return. Which is why I haven’t been doing much blogging of late. Sorry. Normal service will be resumed shortly.