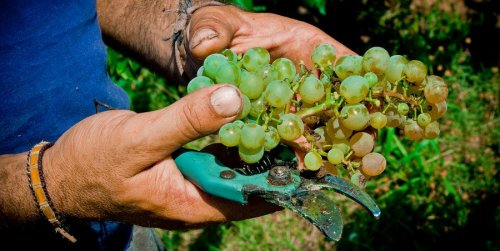 It’s not just our schoolchildren who approach the start of September with trepidation, the end of a long period of relative calm and a few days that can set the tone for an entire year. For this is the start of harvest season, and across Europe winemakers are preparing for and indeed already engaged in action. Twitter is atweet with news, Flickr aflick. Rain at last in Bordeaux. Rotten grapes at Bonny Doon, action in Montalcino.

Some have already started, with early-ripening white grapes the first to go. In Bordeaux the pickers moved in, so far as I can tell, on 1 September; the harvest in Champagne will get under way this week. In Rioja they’ll be drinking this year’s wine within a fortnight, when the raucous annual harvest festival in Logrono begins on 20 September. The harvest festival in Jerez is already in full swing.

The decision to harvest is made using a mixture of science, intuition, meteorology and blind optimism, all to pick the optimal moment when grapes are fully ripe but not withered or diseased, and crucially before the weather turns nasty and ruins everything. But there are countless other decisions, down to the time of day when the pickers get to work: at Chateau Petrus they leave it until the afternoon to give the dew time to evaporate, but fellow Bordeaux big-hitters Chateau Haut-Brion do it first thing in the morning, when the grapes are cold and firm (nothing left to chance here – even though work starts at 6am and the vines grow just yards from the cellars a fleet of chilled lorries are at hand to shuttle the grapes from one to the other, cooler than the Fonz in a fridge).

If the winemaker’s job is hard, the grape-picker’s is harder. A study of American vineyard workers found that their average working heart rate was 119bpm, making a day in the fields a bit like spending eight hours on the treadmill. They also found that, of the workers who were fit and healthy at the start of the picking season, 70% were reporting musculoskeletal disorders by the end of it.

It is terribly kind of everyone to go to so much effort on our behalf. The British, because we produce so little of our own world-class wine but consume so much of everyone else’s, are probably the most spoiled nation of drinkers on earth. One can hardly complain that we get to experience all of the gain with none of the pain, but at this time of year it’s worth sparing a thought for those who put their sweat into our wine. Not literally, I hope.

This entry was posted in Uncategorized and tagged 2010, harvest, vineyards. Bookmark the permalink.