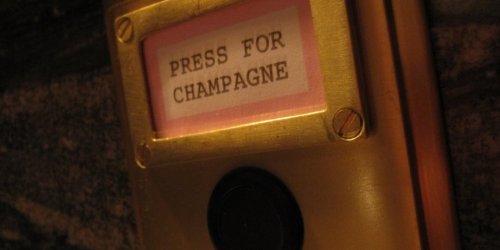 The guys behind Bob Bob Ricard, at least one of whom is called Bob (although I’ve just looked him up and he’s actually called Leonid, and I don’t know where that leaves me), they know a thing or two about branding. Everything, near enough, in this restaurant is branded, down to the butter. Plates? Branded. Windows? Branded. The little metal bins in the toilet that you throw your handtowel into? Branded. Still, it looks good, in a way-over-the-top way, just about having enough humour to avoid falling into crass tastelessness. It all works, the wallpaper, the pink-jacketed waiters, the lot. Somehow.

So inviting over a load of food and drink bloggers and giving them the best you’ve got, that makes a lot of sense, branding-wise. Sure, they made us pay for it. But not that much: we paid £40 plus service for a four-course meal with drinks. Off the menu, you’d have spent that on the drinks alone – and that’s before they got going with the truffles. And they did get going with the truffles. Still, there’s nothing wrong with hospitality. They got decent if mixed reviews when they opened a couple of years back, but Bob/Leonid says they only got their menu right 18 months later. So, they’ll be needing some new reviews then. Perhaps that’s what we’re there for. Maybe they’re just good guys who enjoy hanging out with people who like food and drink a little more than is healthy.

I’m not complaining either way. I had a good night. They gave me vodka and truffles. The food was pretty good. The veal holstein, that’s a good main course. Mashed potato heavy with truffles, schnitzel balanced on the top, fried quail’s egg balanced on the top of that, little anchovy fillets balanced on top of that. Not as tall as it sounds. Excellent, savoury “secret” sauce hidden under the schnitzel. The russian salad with black truffles, that was a surprisingly decent use of quite a lot of truffle. 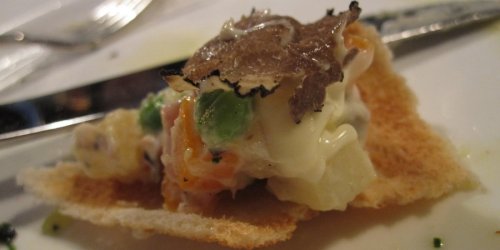 It was all good up to the dessert. A perfect ball of gilded chocolate which melts away upon application of hot chocolate sauce to reveal the chocolate mousse within, studded with brownie chunks and passionfruit and orange jelly. Looked great. 9/10 for looks. Brilliant theatre. 9/10 for theatre. Tasted like an absolute sugar overload. Way too much warm chocolateyness. Reduce it in size by 95% and serve it as the most over-the-top petit four in all of history, a single bite of chocolatey theatricality, and you’re on to a winner. Get some ice cream involved, and something that crunches. This? Too much. They call it Chocolate Glory, but they’ve gone to town too much on the former to achieve the latter. 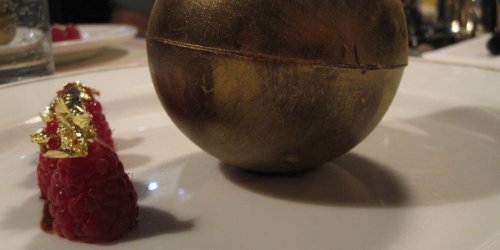 Overall? Go. It’s not cheap, but it is fun, the ambience making up for any lack of value in the food. They’re quite proud of the wine list, and its pricing – going so far as to name and shame the rival restaurants who stock the same wines at much greater cost. I didn’t really investigate, the drinks flowing as part of our set meal. The booths make it a great date venue, or a good place to eat alone. Don’t order the Chocolate Glory. With any luck, someone else will while you’re there. It’s worth looking at. It’s not worth eating.